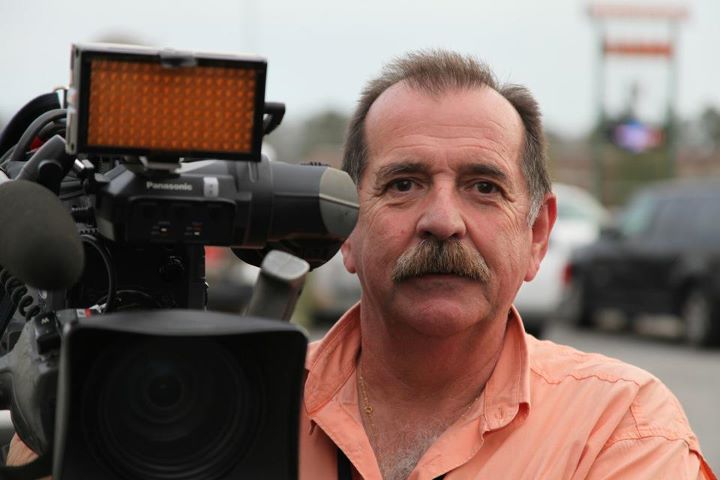 After 31 years as a staff cameraman with CBS News ( 1976 – 2007 ), covering most of the major World events, from wars to Papal trips, hurricanes to mudslides, presidential campaigns to Winter Olympics, from dictators to democratically elected leaders, royal weddings to riots , traveling to 124 countries, being based in 4 foreign  bureaus ( Germany, Lebanon, Egypt and Israel ) and 3 domestic bureaus ( Miami, New York and Atlanta ),  I decided that it was time for a change.

In March 2007, we moved to beautiful Greenville, South Carolina, established our own production company, and although we continue to work for the network’s news departments, we have expanded our activity to include more of the magazine shows, documentaries, investigative units, corporate video, fund raising, remote transmissions and consulting.

After a brief period covering the countries behind the Iron Curtain, I covered the civil war in Lebanon, the invasion of Lebanon by the Syrians, the Middle East Peace process ( while assigned to cover Anwar-el-Sadat and his incredible quest for peace), the Iranian revolution and Khomeini’s return, the Iran- Iraq war, the West Bank and Gaza, the invasion of Lebanon by the Israeli Army, Kenya, the war and Peace process in Rhodesia (Zimbabwe), the amazing struggle of the Jewish community in Marrakech, Morocco,  the Soweto riots and the earthquake in Romania, just to name a few of the amazing stories I had the privilege to witness through my viewfinder, that “ almost magical” little black & white square !

While based in Tel-Aviv, I had the opportunity to travel extensively, even going as far as Central America to cover the civil wars raging in that part of the world. Ireland, the Manchester and Liverpool riots were also part of my travels!

In 1984, I moved to Miami, in order to be closer to Central and South America, where the situation was deteriorating rapidly.

From Nicaragua to El Salvador, from the “war on drugs” in Colombia, Bolivia and Peru, from Haiti to Panama and Cuba, from Brazil and Argentina to the hurricanes in the U-S and the Caribbean, it was a pretty busy time!

Oh, and somewhere in that period comes Afghanistan’s conflict with the Soviet invasion, the Gulf War, Tiananmen Square…Dukakis, Clinton, Pat Buchanan, Al Gore . It was, at times, almost overwhelming!!!

But, I have not been shot at on every story I have covered … 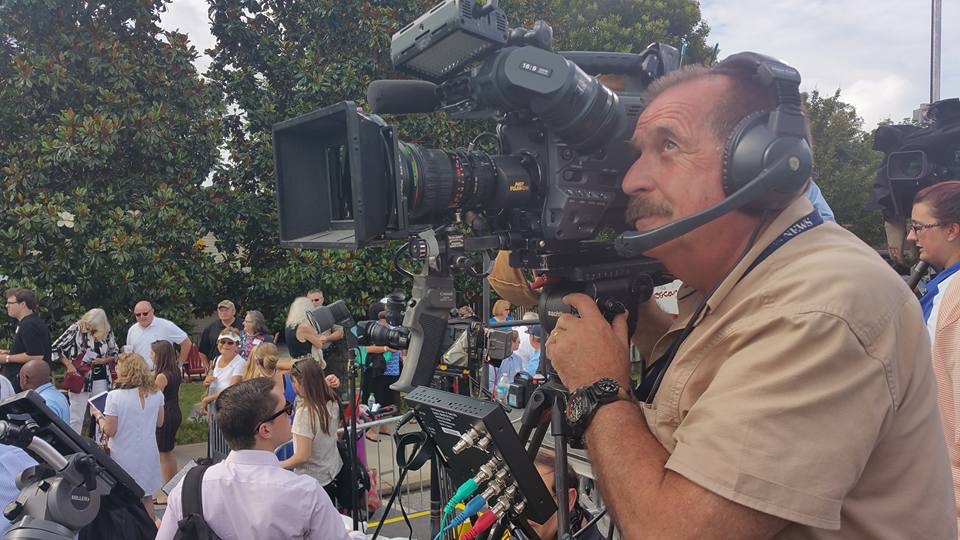 Although I was born on a sunny island ( Santa Maria, Azores Islands ) and temperatures under 60 degrees are not my favorite, I thoroughly enjoyed covering 5 Winter Olympic Games for CBS News and CBS Sports. I will never forget Innsbruck, Calgary, Albertville, Lillehammer and Nagano, their beauty and their Olympic spirit!

Then came the “Big Apple”… the New York Bureau!!!

During that period, I had the great opportunity of going back to Cuba for “Sunday Morning with Charles Osgood” in order to tape a special on Ernest Hemingway!

He’s one of my favorite writers and there I am, tracing his steps and interviewing the main character of “The Old Man and the Sea”.

Sadly, a few months later, the “Old Man” died … it was to be his last interview.

Being based at the CBS headquarters was an experience.

Seeing, first hand, how the whole system works “back there” was an eye opener!

Just living in Manhattan was quite a thrill.

New York has a unique energy, a complex yet simple way of life, in one word …fascinating!

Time for warmer weather, (I am Azorean, after all!)!

I transferred to the Atlanta Bureau, CBS’s main hub in the Southeast.

Great place to be based … the Southeast is full of stories waiting to be told but, once again, the “winds of war “ were in the air …

In February 2003, I was embedded with the 1stBrigade Combat Team / 3rd Infantry Division, the tip of the spear of the US Military from Kuwait to Baghdad, reporting for all the CBS broadcasts.

A couple of months of preparation in the Kuwaiti desert with the 1st Brigade, getting to know all the great guys, all the great units!

When the “initial entry” kicked in, we were the first news team to go live, while the Apaches, the MLRS’s and the Tomahawks flew over our heads.

From then on, we went through 7 major battles, the Kifl bridge, the crossing of the Euphrates, the battle for the Baghdad airport and the takeover of Saddam’s palace.

“Live TV” whenever possible, packages for all the CBS broadcasts, regardless of time-of-air.

After 11 days and 8 hours of combat, the cold “bucket” shower at the airport felt really good…

One particular live shot was very rewarding …at the foot of the bridge over the Euphrates River, during heavy combat, we put Jim Axelrod (one of the best in the business) on air , live, to report for the “Early Show”.

Our team ( Geoff– Thorpe Willet, Jim Axelrod and I), prepared and rehearsed non-stop while in Kuwait, for the possibility of this particular moment.

It happened, and all the hard work paid off. 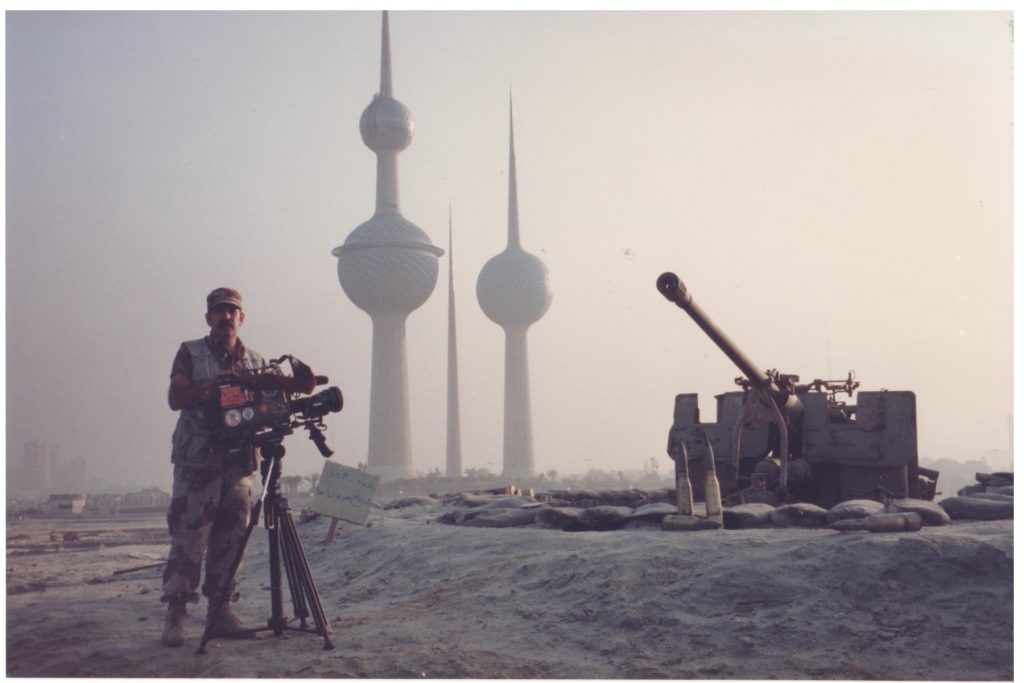 Another highlight of those years in Atlanta … covering Hurricane Katrina.

Only a handful of journalists, who arrived before the hurricane hit, stayed in downtown New Orleans throughout the entire ordeal … quite interesting and challenging, to say the least.

From Boston MA to Portland OR by bus and train, from “sea to shinning sea” with a candidate … now, that’s a trip.

During the 31 years I spent with CBS, I had the pleasure and honor of working with some of the greatest television professionals in the world, from anchors to producers, from reporters to technicians, from desk assistants to traffic personnel.

I am an avid sailor, love to play tennis, cook and eat well. I am a SF combat veteran (Africa 72-74 ) and currently serve as a Chief Warrant Officer with the Georgia State Defense Forces ( GSDF).

Here’s the catch … it is in Portuguese … if you can read Portuguese, I will gladly send you an autographed copy. I promise!